Is the next big thing in urban farming going to be shrimp farming indoors? Not crayfish. Gourmet Pacific White Shrimp is grown in a sustainable greenhouse and indoor aquaculture systems. Over the past few years indoor shrimp farms are popping up between the coasts and in some of the most unlikely places. Many of these farms are a long, long way from the coast.

Unless you happen to live near one, you might never have heard such a thing existed. These closed system shrimp farmers have a hard time filling the local demand between restaurants, retailers, and direct sales to consumers. Yes, shrimp is super popular and plentiful in the United States. But locally grown, fresh shrimp available year around… despite your climate? The harvest might be sold out before it’s ready to eat. Many of the growers doing saltwater shrimp farming indoors have found a new use for barns made vacant by changes in conventional agriculture. However, empty warehouses and factories in cities and towns across the country would work for saltwater shrimping too. How about that retired, outdated school gym? That’s where Sherlock Shrimp in Ridgeway, Iowa grows (population: 306). And, unlike herbs and salad greens, locally grown shrimp is an unusual crop. Competition is rare, at least at this point.

The majority of people in the US has never eaten anything but frozen shrimp. According to the NOAA Fish Files from 2001, two-thirds of the shrimp on the market are imported from Asia, India, and South America – with China being the dominant exporter. Most of it is raised in overcrowded saltwater ponds, heavily dosed with antibiotics, and living in water polluted with petroleum and pesticides. Particularly worrisome – the chemicals used to control parasites. Most unfortunate, given that shrimp is the only type of seafood the World’s Healthiest Foods list includes.

The remaining market for saltwater shrimp is dominated by a few pond-grown shrimp farming operations in the Deep South, and wild-caught harvests from the Gulf of Mexico and South Atlantic Ocean. Here again, the water isn’t the best quality between pesticide and chemical run-off, drilling operation oil spills, and flushed away pharmaceuticals. And a good share of a shrimp’s diet comes from filtering nutrients out of the water. Coastal shrimp farming has also been hard on the environment. In places like Myanmar and Vietnam, production for export has destroyed vast expanses of the world’s mangrove forests, leading to increasing erosion and flooding.

There’s also the food miles involved in transporting it; first across oceans, and then overland in continental distribution. Shrimp that isn’t locally grown is a highly unsustainable food. This opens an opportunity for small-scale growers in the cities, suburbs, and rural areas. People everywhere eat shrimp – at home and while dining out. Closed system, intensive shrimp farming operations with a strictly local market produces better tasting, safer to eat end product – free of pesticides, petroleum, antibiotics, and other chemicals.

The most common system technology for shrimp farming indoor is known as biofloc. It’s a sustainable system with the bacteria in the biofilter consuming the nitrogen the shrimp produce, returning biology-rich, and nutrition-laced water to the pools. The water is heated outside the pools, which also helps heat the building radiantly in cold climate winters. Tilapia can also be grown in the same pools with the shrimp. However, raising two harvests simultaneously requires more water. Shrimp are quite happy and healthy living in shallow water. 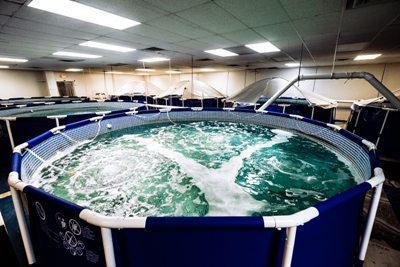 According to a profitability study done by Purdue University in 2015, a complete production process includes a hatchery, nursery, and growing pools. The common practice of bringing the pool stocking PLs (post-larvae) in from a hatchery in Florida is the biggest cause of depleted harvest loss. Shipping of live infant shrimp, as you can imagine, causes high mortality rates. But for a start-up, imported PLs will create cash flow more quickly, because from birth to harvest size takes 4 months. You can always add a hatchery after things are rolling. And should plan on it with as much as 30% survival improvement. Super important to profitability.

The Purdue study puts the cost of setting up an 8-pool system at around $6500 a tank. The harvest of large, high-quality shrimp takes place 12-14 weeks from PL stage. And unlike the frozen, imported variety, they sell for as much as $20 per 21/25 count bag – even in the middle of corn country. However, in some markets, like New York City, fresh shrimp commands $25 for the same size and count. Sure, you can get cheaper shrimp in your grocer’s freezer aisle, but it won’t be free of hormones, chemicals, and pharmaceuticals. It also will not taste anything like fresh, locally grown shrimp harvested an hour or so ago.

Here’s Dr. Andrew Ray from Kentucky State University’s Aquaculture department talking about feed conversion, tank population, and the quality of water in the biofloc technique. If shrimp farming indoors has captured your attention, you might want to check out his recently published a paper in the journal, Aquacultural Engineering. It covers his recent work comparing the benefits of biofloc over clear-water RAS shrimp production systems. You might find his co-authored Preliminary Comparison of interest, but be aware that this was written before he switched to an external biofilter: 2014 Research Gate. The survival rate of purchased post-larval starter shrimp is 20% better, and growth is faster too.

Like aquaponics, constant water quality monitoring and science are hugely important for successful indoor shrimp farming. But if one-time dairy farmers can make the switch and be profitable, there’s no reason anyone else can’t do the same. In fact, it could be the perfect way for other urban agriculture operations to diversify and expand their product line. One thing is certain, the quality of shrimp on the market in the US is for the most part, lacking in health benefits. The antioxidant and anti-inflammatory content, along with its low-fat protein perks pale greatly in the face of everything else it could be laced with. The FDA refused import of 232 shrimp shipments in just the first half of 2015, and that’s just the containers that did get inspected. A situation that has skyrocketed since 2013. Meanwhile, indoor shrimp farming with a biofloc system offers all natural food people won’t be concerned about eating. And then there is a modified BFD or biofloc-dominated technique, and even a vertical shrimp farming technology developed by Royal Caridea in Texas.

Today’s catch grown locally in any available building is definitely food for thought. The US market for imported shrimp was at $5 billion in 2016, according to NPR. Shrimp farming indoors opens the window to a huge opportunity in a breaking market. The oceans are over fished, current conventional cultivation methods are awful, and it fits into the urban farming situation nicely.