It’s the second year that I’ve planted a straw bale garden. Spring is always highly anticipated in a cold climate, but this year it couldn’t get here fast enough. I was chomping at the bit to see if what I learned from the first time around would make for a better outcome. Twelve months is far too long a wait to be able to test new tricks, and hopefully, hone your skills at something you are stoked over doing.

If you missed Season 1 of my straw bale garden adventure, the story starts here. But it wasn’t until frost arrived that I discovered a puzzling thing – my bales did not turn into compost. Why? That’s the part I didn’t understand, because I followed the directions for conditioning the bales. Still, it explained a good share of the nutrient imbalance issues I had, but not all of them. Which led to me basically growing hydroponically in straw trying to overcome the problem.

Straw is an almost inert material before it turns into compost. So, the only source of nutrients your plants have is whenever you supply some. It might as well be rockwool, though it is better at moisture retention, allowing 24 hours or more between waterings. Even if organic fertilizer was added at the time of planting, it only lasts a few weeks. It’s not a slow release chemical fertilizer product. Once it’s gone, supplying further nutrition is only possible with a liquid product. And then… they feast for a day or two, and go on a fast until you feed them again. A fad diet does not build an ample harvest. My tomatoes were incredible. But the peppers did not fair well, and the zucchini was awful.

Miracle-Gro Tomato Fertilizer doesn’t fix everything. The bales were so intact when the garden was torn down before winter, we could stack them on the tractor bucket and move them like blocks. They were, for the most part, just wet inside. Where’s the compost?

Over the winter, I consulted Evan Folds from Progressive Farms on this non-composting problem. Evan is one of our regular magazine contributors, and a font of knowledge about soil, compost, and compost tea. I learned why my straw bales didn’t decompose inside like they’re supposed to. Fake nitrogen. It takes microbes to turn dead organic matter into compost, and synthetic nitrogen doesn’t attract microbes. You have to add them to the bales to get the process going.

Now, if you start organic straw bale gardening using manure as your nitrogen for conditioning, the bales get inoculated with some types of microbes along with it. But if you have no source for truly organic cow manure to make sure that your bales are free of growth hormones and antibiotics? It means conditioning the bales with water soluble synthetic nitrogen. You just switch to organic inputs before planting time, and continue with the through the growing season.

It just so happens that Evan is the guy who invented vortex compost tea brewing. After our discussion on straw bale gardening, I got heavily armed with the good stuff; Compost Tea in a Box from his Microbe Makers company. It’s beyond compost tea, and has several parts you mix at brewing time – including organic soil loaded with microbes naturally. That’s way more types of microbes than using just composted manure offers, and miles ahead of microbes manufactured in a lab.

Don’t worry too much about loosing microbes when pumping all that water into the bales. I did. They should go in with your second saturation step, by now the bales are wet enough that it won’t get too dry in there. Be sure to do the watering part before adding your compost tea.

Apply the compost tea evenly to the bale. Use a watering can with a shower head on the spout, or a pressure sprayer. They don’t move around. Naturally, I had no shower head on my spout the first application, but was properly equipped the next time.

Don’t dilute the tea any more than 5 to 1. I used 1 part tea to 10 parts water, that’s the maximum recommended dilution. It works great in soil, though I don’t think it was strong enough for good initial bale population. Things got much better after the second time I applied tea to the bales, but I didn’t know if I’d have enough for all 40 bales at first. In hindsight, I should have brewed two buckets at once instead of stretching it to the limit. It’s not like it would go to waste when you’ve got a perennial garden, shrubs, and trees.

Plan on a fresh application of compost tea once a month for the rest of the gardening season. Your plants will thank you.

The last step of bale conditioning is getting some phosphorous and potassium in them. I used bone meal and wood ash. A great way to make use of ashes from the wood stove, though getting all the little chinkers off the bales was a job for a blower.

Neither of these are the easiest thing to work into bales – especially if you buy straw from a farmer who packs them extra tight! Something to look out for when you buy bales. Too loose and they fall apart fast. Too tight, and it’s twice as hard getting your fertilizers inside. I don’t think potatoes are initially thrilled with extra tight packing either. I suspect they worked up a sweat trying to get from the bottom to the top. A couple barely made it out.

Last year my bales didn’t warm up near the end of conditioning, though they were supposed to. The author of Straw Bale Gardening told me to cover the bales with black plastic for a few days. Hah! Even then they didn’t heat up. Kinda hard to generate heat when no decomposition is going on to make it happen. A total waste of plastic, and not an inexpensive application when you’ve got 40 bales. 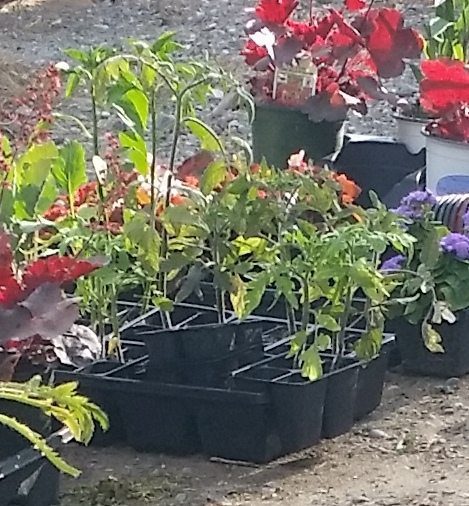 This year? The bales did warm up, but planting was delayed 2 weeks between cold, wet weather and publishing deadlines. And instead of large tomato and pepper seedlings, I wound up planting sad looking little starts from the local garden center – thanks to heavy metal toxicity happening in the seed trays.

Let’s just say that my initial excitement got trampled by uncontrollable events. Things weren’t looking so grand at planting time, even though I finally had warm bales. But I have magic tea, so maybe it will all work out. After all, there are months of summer ahead. In the photo at the top of the page taken on June 21st, the scrawny 6 inch tall yellowing tomatoes I planted have doubled in size or more, and started bushing out. The peppers I bought were even sadder, but it’s all that’s available in my area without spending $5 per plant at the big box stores. The whole garden looked so pitiful for the first couple weeks after the June 1st planting it wasn’t worth snapping a photo.

What happened next? Read Scene 2 of this year’s straw bale garden experiment. Once again, there’s just too much for a single post.