Ocean banks, beaches, and dunes have a rich flora. Surprisingly, many of the plants that grow on seashores are edible! Some rose bushes spontaneously grow on beaches and dunes. One of the species most commonly found in the northern hemisphere is the Rough Rose. It is indigenous to north China, Korea, Japan, and eastern Russia. Introduced to Europe and North America a long time ago, it has escaped from gardens and now grows just about everywhere. In the wild, it is often found on the banks of the St. Lawrence River in Quebec, on dunes in Cape Cod, and most of the New England seashore. This shrub is very resistant to winds and salt spray.

Like the flowers, you can eat rosehips. However, it is crucial to remove the seeds, which have prickly hairs that can irritate the skin and digestive tract. Rosehips seeds are used to produce itching powder! Fun fact: rosehips contain more vitamin C than oranges. 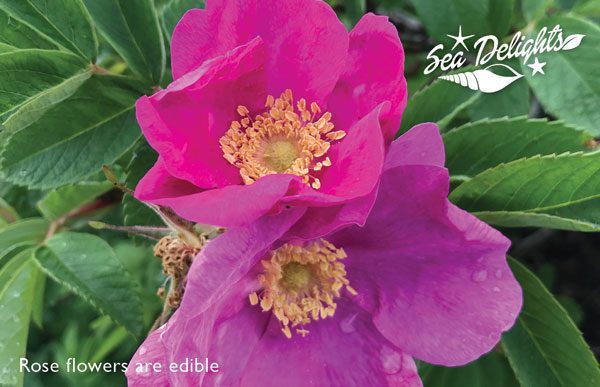 Marsh samphire is a plant that grows in the wild on the banks of northern seas. It has a delicious taste similar to salted asparagus and is used to season salads or as a vegetable to accompany meats and fish. This plant is occasionally sold in grocery stores or appears on restaurant menus, usually as samphire greens or sea asparagus. Available in some nurseries, it is relatively easy to grow in a pot at home in full sun, but it requires frequent watering with salt water (1 teaspoon of sea salt per liter of water). Another common plant found along the oceanfront is creeping saltbush, also called spreading orache. This plant has thick and plentiful spear-shaped leaves. Closely related to lamb’s quarters, a weed commonly found in gardens, creeping saltbush has a milder taste than spinach with a hint of salt. It pairs well with salads and is delicious with seafood chowder. Rich in vitamin C, sea peas saved the European settlers who first arrived in Canada from scurvy. It was a plant that people could eat in abundance and was a large part of the Native American diet.

Sea parsley looks and tastes like lovage. That’s why this plant native to north-eastern North America and northern European coasts is also called Scots lovage. It has compound foliage with red twigs. In mid-summer, it bears beautiful white umbels of flowers. This plant is sold in some nurseries and can quickly be grown in any garden.

Since sea parsley also has a flavor similar to Italian parsley, it is a good substitute in any tabbouleh, soup, sauce, or stew recipe. Adventurous chefs can even create a pesto by mixing half sea parsley with half creeping saltbush leaves.