As seen in: Issue 32
by Rich Hamilton

Is The Forest City The Way Of The Future?

The idea of a sustainable world is becoming more and more essential as fossil fuels are running out and the damage we have caused is close to beyond repair. How are we going to make a change?

Revolutionizing the places we live, such as our homes and our cities, and making them more in tune with nature is one way of doing it. Architect Stefano Boeri has drawn up plans for the world’s first prototype forest city, a hypothesis which, if successful, could become the template for how we build habitats in the future and improve old ones. Boeri and his team are well-known for creating green projects around the world, namely the very successful vertical forest in Milan, Spain. The forest city they have planned for China, however, is the most elaborate project they’ve ever designed.

Construction on the world’s first forest city is expected to start this year in China’s Liuzhou region, a city of about 1.5 million residents in the province of Guangxi. It will go up along the Liuzhou river with a 225-hectare urban area; the surrounding green space, however, will total 25,000 hectares.

The forest city is China’s first attempt to address its terrible pollution problem as well as accommodate its increasing population. It seems like an excellent solution to the problem, as Chinese authorities must find a way to build more efficient cities for its growing number of inhabitants. Currently, China has 160 cities with a population greater than one million, all of which are plagued with substantial smog issues from coal, power plants, and vehicle pollution.

China is also the country with the highest rate of urbanization in the world. Over 14 million inhabitants are migrating to China’s packed cities each year. With this in mind, Boeri plans to use his famous skyscraper design to accommodate more people in the new city’s geographical footprint.

Meanwhile, the land will be maximized for farming and outdoor leisure. Dozens of tall and middle-size buildings will stand in the city, surrounded by trees (ranging from 3-9 meters in height), shrubs, and flowering plants. Each vertical forest will have 20,000 square meters of plants grafted upon it. 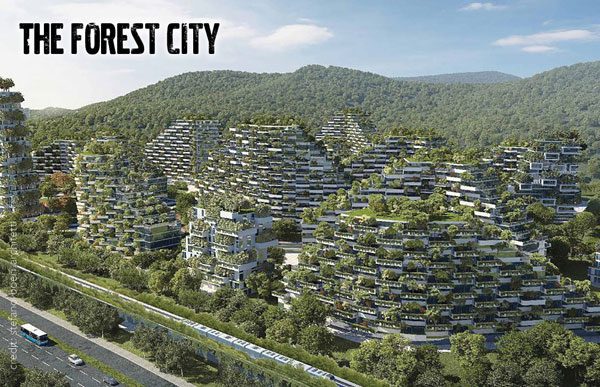 Once completed, the Liuzhou forest city will accommodate up to 100,000 residents. They will benefit from more than 40,000 trees and one million plants of different species. The extensive plant life will absorb 10,000 tonnes of carbon dioxide and 57 tonnes of pollutants, while also producing approximately 900 tonnes of oxygen annually.

The entire city is also planned to run on renewable energy, especially solar and geothermal. The Liuzhou authorities want to build about 70 buildings cascading with foliage, which will be a mix of homes, hospitals, hotels, schools, and offices.

There are even plans to connect the new city via a high-speed road line system to make it compatible for use with electric cars.

Boeri says he believes Chinese officials have finally come to terms with the need to find a new and more sustainable model of urban living.

“They have created these nightmares,” he says. “They have to imagine a new model of the city that is not about extending and expanding but a system of small, green cities.” If successful, the Liuzhou Forest City could become the model by which all Chinese cities are built in the future. A second project is already in the planning stages for Shijiazhuang, an industrial hub in northern China that is consistently among the country’s ten most polluted urban areas.

How we are living in the developed world is unable to sustain itself for much longer. We should all be hopeful that this first forest city is a success, so we can replicate it elsewhere in a bid to save our planet for future generations.