You don’t have to work in a garden or partake of its harvest to benefit from one. Research is proving that urban gardens and green spaces have a profound effect on a person’s physical and mental health, and the community environment. An ornamental garden is not frivolous or wasted space. They have the power to reduce crime in the city, create community, and offer to heal simply by existing. 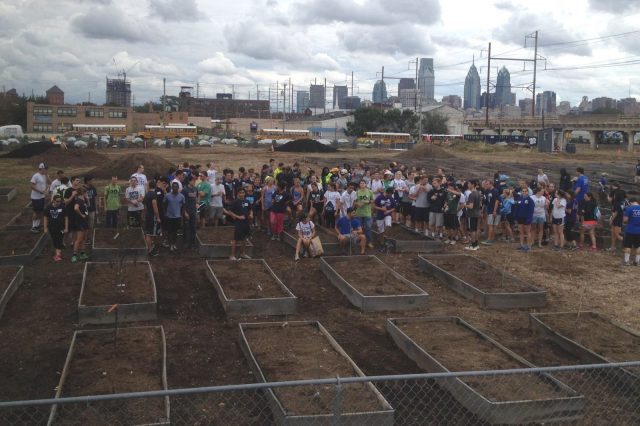 Has a hospital near you added a ‘healing garden’ recently? It’s a growing trend arising from the work epidemiologist Charles Branas, Ph.D., who is now the director of Penn State’s Urban Health Lab. The connection between gardens and green spaces and human health arose from his observations as a paramedic.

It all started in Philadelphia as a coordinated effort between health researchers, medical community members, and the Pennsylvania Horticulture Society. Thousands of vacant lots across the city were cleaned of derelict buildings, trash, and weedy overgrowth. In their place grass, trees, and gardens were planted and maintained in this Clean and Green program. Then crimes statistics and neighborhood health and interaction were studied over a period of 4 years. They actually put researchers in the neighborhood armed with heart rate monitors to measure the difference in passersby cardiac behavior before and after walking by the randomly placed plot. In the end, the theory was proven – not only did these urban gardens and green spaces reduce stress and lower heart rates for all who encountered them, they also improved blood pressure, mood, and outlook. Crime dropped in the neighborhood too, both gun related incidents and other criminal activity.

In 2013, the research group and target cities expanded to include the University of Michigan and Rutgers University with greening projects taking place in Flint, Michigan, Camden, New Jersey, and Youngstown, Ohio. The effects of these gardens and green spaces springing up in blighted neighborhoods with high crime rates and low-income residents repeated themselves. People in all places benefit greatly from the presence of plants;  flowers and greenery, and fruits and vegetables.

Furthermore, the removal of the broken windows, vandalized buildings, and hiding places for criminals and drug addicts turned the neighborhood from an adversarial group of residents bound only by address proximity to a socializing community who cared about what happened on their block. The findings are conclusive. Community gardens and green space have even greater power in turning people’s lives and a neighborhood around when the local residents start using it to produce food for themselves. Now they have a shared purpose, tending crops and eating the harvest. Good food alters how they interact with each other.

It’s not so much due to their education level as it is the things people are surrounded by on a daily basis and are powerless to change or escape. A clean and green area results in far less crime, and healthier people with a positive outlook. There are examples of similar results in other cities in the US, Canada, and abroad that aren’t involved in these research projects. It’s not just what you eat… people reflect their environment. You are what you absorb.

Violent crimes – shootings and stabbings – are a reflection of the environmental health of a geographic location. Gardens and green space are vastly less expensive, less intrusive, and less ugly than the war on crime, the war on drugs, and overcoming rampant mental illness and disease. Philadelphia has learned that it not only saves the city money but pays back far more than it cost to change the ugly and disintegrating to living and colorful. Greening is just as contagious as blight but works faster at changing a neighborhood.