Make Your Own Sugar

Until last week, I never really thought about how to make sugar at home. It all started when we were digging through antique books, and I ran across the merits of growing beets for homesteaders. Not that I didn’t know that most sugar used in home cooking in the US comes from sugar beets… but this part of the beet section captured my interest, especially since all commercially grown sugar beets today are GMOs. So how do you make your own sugar?

Sugar is made from this root, and for this purpose the white beet is preferred. They are washed, and boiled soft; when the juice is pressed out, by a screw press, and then boiled down to a consistence proper for graining: It is then poured out into flat pans, made for this purpose, and gently stirred while it is cooling. In order to render it more dry, and white, it is put into the screw press, and there severely pressed; by which operation the molasses is forced out, leaving the remainder almost as white as lump-sugar. The molasses may be again boiled down and converted into sugar as before, or it may be kept for use.

… It is almost useless to say, that it will afford ardent spirits as readily as it will sugar.

See further, Mangel Wurzel. Probably this may be found the best adapted for the purpose of making sugar. 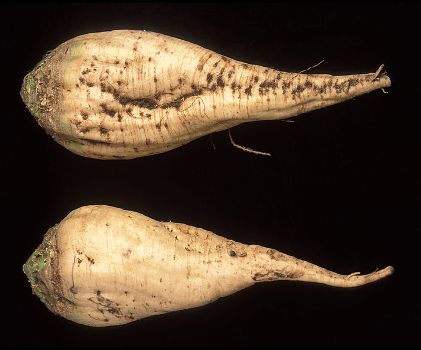 But John Nicholson had no more to say about making sugar, now he was onto the mangel being excellent livestock feed, and crop production. Interesting. Can you still buy this Mangel Wurzel seed? I was doubtful, because he wrote this book, The Farmer’s Assistant, 1824. Now, almost 200 years later, it’s one word – Mangelwurzel – a huge, fibrous beet type used for livestock fodder. But the sugar beet is a mangel, just a variety that is white with a very high amounts of sugar. While beet sugar was being manufactured in Europe before 1824, it was still an imported good in the United States, and not something homesteaders would have easy access too, or the funds to keep it stocked. They had to be self-sustaining.

Having this knowledge today might come in very handy. Not only are there a host of people going back to living off the land, but one never knows what tomorrow will bring. Look at the reason that beet sugar became an industry – as a result of the Napoleonic Wars making cane sugar completely unavailable in Europe for years on end. Yes, you can use honey, and some people think it’s better for you. Perhaps they’ve not learned that it’s full of pesticides? At least if you grow beets without them, you can get relief from chemicals being in EVERYTHING. You can get both non-GMO and organic sugar beet seed. Only organic processed sugar is non-GMO these days.

Since almost all farmers supplying the sugar industry switched over to growing GMO sugar beets by 2010, finding safe seed is not easy, and it isn’t super cheap either. I suspect this is because a) very few people have an interest in growing sugar beets in their gardens, and b) it takes 2 years to get seed to collect as beets are a biennial. From the 4-5 organic seed places that offer them for sale, only Rare Seeds states a sugar content (super important!), and only Sustainable Seeds sells them in bulk packages. There are places that sell this seed for deer plots, but intelligence says this would be inferior for our purpose. You need 8-10 pounds per acre, which seems like a huge amount of beets – until you realize that the bulk of the raw material is waste when it comes to turning it into an end product like sugar. If the sugar content is 15-20%, then you’ll get 15-20% of what you grew as a usable sweetener.

So, how much should you grow? How much do you want in the end? It was once an annual thing. Every one grew a small field of sugar beets – to make the sugar that would supply the kitchen until the next harvest season. To produce enough sugar for a family of 4-5 people took at least 1/4 acre, which translates to 2.5 pounds of seed, and a lot of early weeding, because until the tops fill out to shade the ground you’ll have a happy crop of unwanted things trying to hog the food and water source. The yield at harvest would be about 5 tons of roots weighing 2-8 pounds apiece. There are some homesteaders and off-griders already doing this. But their process is quite a bit different than this description from 1824. Some people peel them, and will make a lighter colored syrup, because there is pigment in the skin. We 21st century folks are big into labor saving machinery, so most run the beets through a juicer before cooking. That’s not how it was done in the early days, but it definitely would speed up the cooking time, and make your mush easier to press. From that description written by Nicholson, I would assume he’s talking about a sausage press or cider press for squeezing both the mash, and the partially dried molasses. No one is pressing the mash at home these days, they strain it. With one exception I located, they’re all making molasses, not squeezing it out of the sugar! Totally the opposite of where I began this investigation.

The deeper I dug trying to locate more information on Nicholson’s brief description, the more people I found brewing up brown syrup. Are we all in too big a hurry anymore? There were several comments about not wanting to waste the electricity to do it how it used to be done, which makes some sense, especially in the city. Most people used wood-burning cook stoves when making sugar at home was the thing to do – as long as you had enough wood split, there was no concern over burning too much. Making the year’s sweetener was not viewed as a waste of resources. I did find some old-fashioned cane molasses makers in the Appalachians, that’s a totally different thing, but they still use wood to do the processing.

Air evaporation takes a long time, especially when you put the syrup into a canning jar. None of these homemade sugar makers have tried a big shallow pan. I’m surprised not one of them tried a dehydrator. Maybe everyone is trying to adapt commercial sugar manufacturing methods used today to home cooking equipment. Am I’m the only person to stumble across this bit in the ancient book? Anyway, low heat and shallow pans would speed the evaporation up tremendously.

Before you even consider this as something you want to try, be forewarned… it doesn’t taste like store-bought sugar. They use lime and carbon dioxide, along with charcoal to remove solid impurities, and refine it repeatedly to get to their end product. And similar to that 1824 description, they force out ALL the molasses, and add some back to granular sugar to make brown sugar. But they use centrifuge extraction instead of pressing to separate the molasses from the newly forming crystals created by seeding with sugar crystals. Maybe the answer is to repurpose a washing machine into a home centrifuge to remove the molasses from the desired product. An engineering project for the DIY off-gridder.

There are some home brewers experimenting with extracting the sugar syrup for making wine, or fermenting the mash into vodka. Here’s a winemaker showing us his first syrup brew. How his blackberry wine turned out we’ll never know, but he hasn’t cooked it down to a thick brown syrup.

Finally, I came across Vermont farmer, Erik Andrus, who started the Vermont Sail Project that transports rural farm goods the old way by water to New York City. He did a test crop of different sugar beets, and a tried some rustic refining, while investigating the possibility of adding it to his farm’s product line. He wasn’t impressed with the flavor, but a good number of those who have begun making their own really enjoy it. Here’s a video done about small scale sugar processing on the Andrus farm.

He later wrote an article giving more details on what he learned during this trial, which was done over multiple years and crops. Andrus notes that some changes in the refining process would probably remove the earthiness from the flavor. (Yes – like squeezing the molasses from the sugar!) Deer plot sugar beets were the worst in terms of germination rate, but still had 17% sucrose. There’s a link to both articles about his testing in the list beneath this article. I’ve added a couple other interesting articles written on making it at home. None of these people have come up with a product even remotely “almost as white as lump-sugar“. Maybe white sugar was not so white 200 years ago?