So, you’ve done some planting. They are all getting sun, and you water them regularly. You even picked up a good fertilizer! But the flowers you expected to see haven’t bloomed! Here are five reasons why your flowers might not be there – all of which you can fix by making some small changes. And for one of them, you don’t have to change anything. To paraphrase Axel Rose, all you need is a little patience. Yes, pruning your plants is a good thing to do, but how and when you do it could be the reason you aren’t seeing the flowers you were expecting. For example, lilacs, forsythia, and some types of hydrangeas set their buds for the next season’s bloom a year in advance. Late-season pruning of these plants might remove the buds for the upcoming season’s flower. A little research on your plant’s pruning particularities could go a long way in making sure you see flowers bloom. We all know plants need sun, but a few hours of light might not be enough. As a general rule, most flowers require six hours of sunlight. Without those six hours, plants can get stressed! And a stressed plant doesn’t bloom because it’s too busy focusing on staying alive. Stressed plants drop their buds and push towards the sun. So, if your plant is growing tall but isn’t looking super healthy, a lack of sun could be why.

But that’s not all. Temperature is also a critical factor in growing healthy, happy and blooming plants. And while the sun provides heat, it provides more warmth in the afternoon than it does in the morning. So, read up on particular plants. If they require “full sun” and are only getting the early day rays, that won’t be hot enough. Give those plants a Western sun exposure and use the area of Eastern exposure for the ones that can’t take the oppressive heat of the afternoon sun. 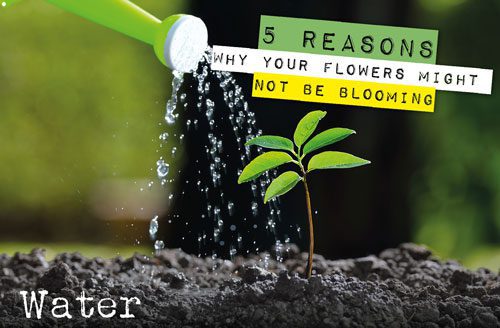 This one is pretty simple. How much and how often you water your plants can very easily be why they aren’t blooming. Some plants require more water than others, and over-watering can be as big a problem and under-watering. Again, a little research into the particulars of your plants goes a long way. Yes, nitrogen indeed promotes stem and leaf growth in plants. However, just like a plant can get too much water, it can also get too much nitrogen. So, if your plant looks green and healthy, but there aren’t any flowers blooming – this might be why. To fix this problem, stop using your fertilizer. Watering your plants will wash away some of the excess nitrogen. Wait a couple of weeks then switch to a new fertilizer with extra phosphorus and little to no nitrogen. Most plants have to mature a little and put down roots before their flowers bloom – which for annuals can take several months and for most biennials, you won’t see any blooming at all the first year and will have to wait until year two to enjoy the flowers. So, give them a little time. This also applies to transplanted plants.

Medicinal Weeds: The Many Virtues Of Mullein
Out In The Greenhouse: These Warm-Season Crops Will Thrive
Recent post January 15, 2021