No one is too surprised when news of urban gardeners being tossed off the ground they work, disappointed perhaps, but never shocked. But here’s a tale of urban farmers getting the boot with a silver lining. For about 30 years the vacant land under heavy air traffic at St. Louis International Airport in Kinloch, Missouri has produced mighty fine crops, though the very reason it is unoccupied destroyed a community. Kinloch is the oldest African American city in the USA, and a next door neighbor to St. Louis, but in the 1980s the airport acquired a large chunk of it for expansion, which drove 80% of the population out the thriving community. Extending the airport has never happened, but the land has been put to good use ever since the neighborhood became a skeleton of itself.

While it’s recent history is one of escalating crime, community restoration work in just the past couple years has begun turning the atmosphere around in this town that is now home to only about 230 people… and a whole lot of vacant acres that is being quietly group farmed. Most of them are retired, the urban farm keeps them busy and offers members of the community a gathering spot. A shack built from odd scraps draws them year around. In good weather the dominoes and camaraderie take place outdoors, and in bad weather they take it inside.

Last fall executives from the development company, Clayco, walked through the farm. It bode ill to the long term occupant farmers. Not that they were illegally there. A verbal agreement existed between the airport authority and the urban gardeners. Their using and maintaining the land saved the airport a lot of money in lawn mowing every year. But a few years ago, Clayco bought the property, and now was ready to move forward on a business park development.

They had their doubts about sowing seed for the 2015 growing season, but this development company owns a lot more land that this piece next to the airport. Bob Clark, president of Clayco told the group not to worry, he had a proposal for them that would mean not throwing in their hoes. Needless to say, the group was skeptical, but Clark actually offered them more than they’d had in the first place. 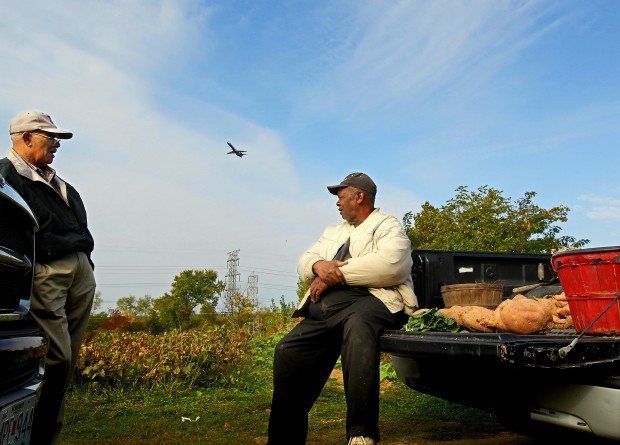 The urban farm property will now be across the road from the original plot that’s been being worked for decades, and instead of collecting rainwater and hauling jugs of water for their crops, he’s prepared to make their work a lot easier. Clayco is putting in running water, irrigation, and erecting a building for the farmers – complete with electricity and restrooms. And they are deeding the 8-acres of land to the farmers.

A great step forward for a community in need of repair. All this began 35 years ago when one man couldn’t afford to feed his family fresh foods bought at the grocery store – so he grew his own. Others got involved and the garden grew to a sizable hand-worked farm. The gardeners have changed over the years, but the food has always filled their tables and the balance went to retirement homes and others in need. Now it looks like they’ll be able to continue growing fresh food, and have a far more comfortable gathering spot… on property that can never be taken away.

Totally awesome. It’s not always the squeeking wheel that gets the grease! But there aren’t too many developers out there who would do what Bob Clark has done for the farmers of Kinloch either. For the Garden Boys, it’s a part of life they can continue far into the future.